Call for a FREE consulation 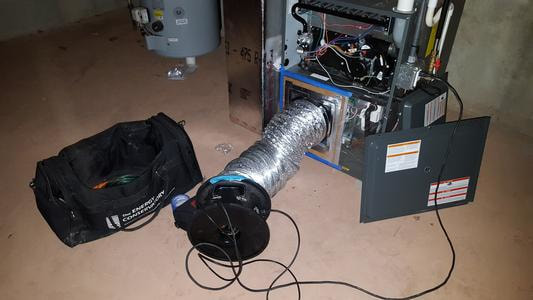 
Total Duct Leakage:
Duct leakage or Duct Blaster testing consists of connecting a fan to pressurize the ductwork to a known pressure.   By measuring the flow through the fan, we know the amount of leakage in the duct system.   This is based on the  principle that, if pressure is stable within a system, then the amount of air entering and exiting the system must be equal. If more air was entering than exiting the pressure would rise.  If more air is exiting than entering the system, the pressure would drop.
To prepare for this test we seal off the registers and returns, and connect the fan to either the blower unit (as in the picture above), or to one of the returns.   By having properly sealed duct work, less energy is wasted in heating and cooling areas such as the attic or and unconditioned basement where we don't need conditioned air.  This results in greater efficiency, comfort and health for the occupants, and increased durability of equipment.  According to John Krigger and Chris Dorsi in their book 'Residential Energy':
"duct leakage typically wastes 10% to 30% of the heating or cooling energy purchased by the homeowner."

While it is possible to test duct leakage by depressurization, we at Energy Auditors typically avoid this approach because of the risk of pulling unhealthy particles and air from undesirable portions of the house (the attic for instance).


​Additional Testing:
Additional testing for duct leakage consists of testing for 1) leakage to the outside of the building envelope,  2) smoke testing to diagnose the actual weak spots in the system, and 3) pressure pan testing.


Leakage to outside:
Duct leakage within the conditioned portion of the home is generally considered less wasteful than leakage to unconditioned areas like the attic or basement.   This is not to say that large leakage within the home is good or acceptable;  it results in conditioned air being poorly distributed within a home and can lead to significant comfort issues.   Nonetheless, some codes allow measurement of only that leakage which is to the "outside".
​
Smoke testing for duct leakage:
This is a method of helping contractors find specific sources of duct leakage.  This test is used to help identify leakage that must be corrected and is generally employed when trying to get a failing system to pass code.   Theatrical smoke is blown into the duct system (while registers and return grills are sealed) and we then look for smoke leaking out.   Typical areas of leakage are around the blower cabinet, and at poorly sealed take-offs along the main trunk line in the basement.   We also frequently find flex ducts which have either never been connected to the take-offs, or which were pulled loose during the installation process.

Pressure pan testing:
Another method of determining relative duct leakage (rather than the specific measurement provided by total leakage and leakage to the outside) is pressure pan testing.   A blower door is used to pressurize (or depressurize) the house to a known pressure, and  a pressure pan is then used along with a manometer to measure the pressure difference between the house and the duct system.  If the result is that there is no pressure difference, that would indicate very little or no leakage.   If there is a significant difference, that would indicate that the ductwork has leakage to the outside.  ​
Call for a FREE consultation